The President, Regenerators wrote to the Chair, Icon Water on 18 October 2021 to bring to her attention the damaged to an area inside the Red Hill Nature Reserve, which had been caused by excavations carried out by Icon Water. The President requested that Icon Water forward a copy of the rehabilitation plan for the site and a commitment towards ongoing weed control within and around the area of disturbance.

What to do about Noisy Miners?

Noisy Miners are becoming an increasing problem on Red Hill. They are very aggressive and deter smaller birds from occupying and nesting in the area. Research has looked at ways to mitigate the impacts of Noisy Miners, including culling. The Red Hill Regenerators plant bushes and understory to help give protection to smaller nesting birds. Does this work?

As part of a response to the environmental damage which resulted from the 2019 bushfires, the Commonwealth Government identified $10m “to support multi-jurisdictional collaboration and targeted interventions for 10 priority bushfire-affected multiregional species or group of species (who share habitat and threats)”. More…

One of the 10 bushfire affected species is the Gang gang cockatoo.

The Regenerators have been awarded $24,000 and selected to work with the ACT Government on a citizen science project which is designed to be:

“developed in three stages focusing on the improvement of the existing Naturemapr platforms and create and manage INaturalist projects. Both platforms will have specific gang-gang web interfaces to enable collection of consistent data across location, tree hollow, foraging, nest hollow and nest tube data points. The project will explore opportunities to enhance interactions and engagement with groups and individuals across the Cockatoo’s range using the platforms”

More information about this project.

Congratulations to Regenerators from ACT Government and Senator Gallagher

I am delighted to let you know that the Red Hill Regenerators were last night (5 August 2021) announced as the national winners of the Australian Community Media Landcare Community Group Award!  The award ceremony was to be held in Sydney at the national Landcare conference but this was converted to an online function including a gathering in Canberra that linked into the national hook-up.

It’s quite an honour to be chosen from all the state and territory finalists. The Award was presented by John Paul Maloney, the Managing Editor of the Canberra Times, which is part of Australian Community Media. 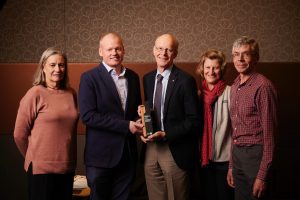 Red Hill Regenerators have been working on the Reserve since 1989 and we have made a significant impact in that time. You can read a summary of our entry below and feel proud that you have been part of this achievement.

Thank you to all of you who come out in all sorts of weather to work on the hill – weeding, planting, counting and in many other ways. I am constantly amazed at the combination of commitment, deep knowledge and relevant, broad experience that you bring to the group.

In particular, thanks to Michael Mulvaney our founder and guru who continues to inspire and guide us.  When I accepted the award last night, I acknowledged Michael’s crucial part in our success and there was spontaneous and loud applause from the audience for his contribution – it was well deserved.

Thanks to Landcare Australia including Karissa Preuss and the team from the ACT, all the Landcare supporters including the Federal Government and Australian Community Media, our ACT partners, the ACT Government Parks and Conservation Service including our wonderful Rangers and the support we received from the ACT Southern Catchment Group.     END_OF_DOCUMENT_TOKEN_TO_BE_REPLACED

A community petition has called on the Legislative Assembly to oppose housing development on the Federal Golf Course.

The ACT Environment Minister has rejected community claims a plan to allow development on the Federal Golf Course will damage breeding areas for the gang-gang cockatoo and superb parrot.

Rebecca Vassarotti said the plan, first flagged in 2019, provided the best way forward to protect key environmental values for the area, by limiting scale and location.

“It also enhances protection for biodiversity by recommending the expansion of the Red Hill Nature Reserve to currently unprotected woodland areas of high ecological value in the northern section at Deakin Section 66 and at the Federal Golf Club,” Ms Vassarotti said. END_OF_DOCUMENT_TOKEN_TO_BE_REPLACED

Please read the advice below regarding Covid protection at this event
You are invited to join us on Sunday 1 August 2021 at 09.00am for our next work activity on Red Hill.   On Sunday, we plan to continue our progress from previous months to deal with mainly verbascum, by beheading/dabbing the flower spikes and chipping plants.
END_OF_DOCUMENT_TOKEN_TO_BE_REPLACED

The Red Hill Regenerators ParkCare Group supports the recently released Red Hill Integrated Plan, which provides the means to bring certainty to the protection and management of the Red Hill environment.

The Plan is a well-researched, professional document that responds comprehensively to the Legislative Assembly Resolution from which it arose.  The Plan strikes a good balance between the important need to provide strong protection for biodiversity both inside and outside the Red Hill Nature Reserve, protecting the amenity of residents and allowing for some limited development activity.

It provides an opportunity for adding several areas of woodland to Red Hill Reserve and limits development near Kent Street, Deakin to the existing built footprintThe Plan is a framework document that now requires a great deal of implementation activity, including funds, to deliver real outcomes.  We trust (and remain vigilant) that the coming years will bring to fruition the strategic, well informed vision of the Plan.

Please read the advice below regarding Covid protection at this event
You are invited to join us on Wednesday 14 July 2021 at 09.00am for our next work activity on Red Hill.  We plan to continue our progress from previous months to deal with mainly verbascum, by beheading/dabbing the flower spikes and chipping plants.
END_OF_DOCUMENT_TOKEN_TO_BE_REPLACED

You are welcome to join our monthly activities. We carry out bush regeneration work within the Red Hill Nature Reserve on the 1st Sunday of each month, from 9am to 12:30, except for January. By joining the Group, you will automatically be advised of any Group activities and their locations. You will also be supporting the preservation and conservation of a vital ecosystem and recreational resource