The Small Ant Blue (Acrodipsas myrmecophila) is an uncommon species with a peculiar lifestyle. It has a symbiotic relationship with the coconut ant (Papyrius nitidus) where the butterfly larvae are attended to by the ants, and also feed on the ant larvae. While there are a number of colonies of coconut ants on Red Hill, no Small Ant Blue butterfly colonies have been found. The Red Hill Regenerators have initiated a small project to attract the Small Ant Blue butterflies by planting a group of six closely spaced Red Gum (Eucalyptus Blakelyi) close to an established colony on coconut ants. As the Red Gums mature, the site will be periodically inspected for signs of colonisation by the butterfly. 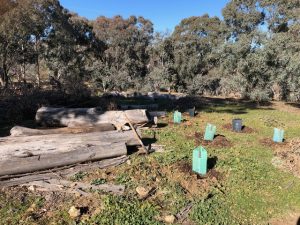