Kangaroos are impressive breeders, and we understand from the ACT Government website that it is possible for 60 per cent more animals to be added to a population each spring when the young emerge from the pouch. This combined with the absence of predators and a plentiful food and water supply can lead to a situation in which kangaroo populations ‘overshoot’ their food supply, then decline rapidly due to mass starvation. This can have dire consequences both for kangaroo welfare and the health of the ecosystem. For these reasons we thought it important to know more about the population of kangaroos in our reserve, and better understand what numbers might be sustainable.

As a consequence in late Autumn (when most joeys have left the pouch) we undertake surveys of the stocks of kangaroos in the Reserve. The surveys are undertaken by walkie-talkie co-ordinated line-sweeps involving about 10 volunteers on two days a fortnight apart. Two sweeps are completed so that the accuracy of the count can be tested and confirmed. The line commences along Hindmarsh Drive so that the kangaroos would not be driven towards this busy road but instead moved towards open spaces where they can be more easily counted. This also enables the counters to pass around the kangaroo concentrations with minimal further disruption.

A census in August 2010 of the kangaroo population on Red Hill has recorded 447 within the 375ha reserve. Experts consider one kangaroo per hectare to be optimum. A second count taken on 7 August 2010 recorded 482 (not including the kangaroos on the adjacent Federal Golf Club course), giving an average of 460 on 275ha of reserve. This translates to around 1.7 kangaroos per hectare, which is probably higher than the ideal. However, to put this into perspective, one cow eats as much grass as around 13 kangaroos. On this basis there would need to be 2600 kangaroos on Red Hill to equal the cattle grazing pressure prior to their removal in 1995

The census was repeated in May 2011, when 636 were counted, being a 36% increase, or 2.3 kangaroos per hectare. A further 65 kangaroos were recorded as resident on the Federal Golf Course.

The 2014 kangaroo census was taken on 6 July 2014, when 781 kangaroos were recorded on Red Hill and 81 on the adjacent golf course. In addition to the kangaroos we also counted 7 foxes, 8 hares, 9 swamp wallabies and 5 rabbits. While to total number of kangaroos counted (862) was similar to 2012 (883), it should be noted that the census was called off close to the end because of the very distracted nature of the kangaroos at that time, resulting in about 100 kangaroos not being counted. It is likely therefore that the total 2014 population of kangaroos was probably around 950 or around 3 kangaroos per hectare. It seems therefore that the kangaroo population on Red Hill grew at an annual rate of around 10%pa between 2012 and 2014.

The 2017 census was taken on Wednesday 24 May 2017, and organised by ACT Parks & Conservation with assistance from the Regenerators. The census estimated approximately 1,000 kangaroos, composed on 650 counted on the Red Hill Reserve between Hindmarsh Dr and Red Hill Drive, an estimated 200 between Red Hill Drive and Kent Street, and 150 counted on the Federal Golf Course.

Managing kangaroos in the ACT

More on kangaroo management in the ACT…

ACT conservation research on the effects of kangaroo grazing on biodiversity (April 2015). More…

A seminar was be held by Brett Howland titled “Managing kangaroo grazing for the conservation of grassland and grassy woodland fauna”, at the Fenner Seminar Room, ANU, 29 June 2015, 10am.  The attached flyer summarises the research findings, which have significance for managing the kangaroo population on Red Hill Reserve. More…

Q&A about proposed ACT Government kangaroo cull in 2015 and 2016.  Some groups think that culling kangaroos in ACT Nature Parks is ‘unnecessary’ and ‘unethical’. More…

The Plan aims to maintain populations of kangaroos as a significant part of the fauna of the ‘bush capital’ and a component of the grassy ecosystems of the Territory while managing and minimising the environmental, economic and social impacts of those kangaroo populations on other plants and animals, grassy ecosystems and rural production. The Plan’s policies are grouped around kangaroo welfare; managing interactions between humans and kangaroos; managing kangaroo densities; and managing captive populations.
Culling kangaroos in accordance with the Plan requires an authorisation, issued by the Conservator of Flora and Fauna or the Custodian of public land. The application process and conditions of the authorisation will be similar to those of aNature Conservation Act 2014licence. The timing of the kangaroo culling season and proficiency testing requirements for all kangaroo shooters in the ACT have not changed.
Additional policies relating to the selected use of fencing to protect environmental values or prevent kangaroos moving into particular land; management of kangaroos at greenfield development sites and management of kangaroos on agisted and unleased land have been included. The Plan provides updated information on the local research on the impacts of kangaroo grazing on biodiversity conducted since 2010 and amends policies to make reference to the current codes of practice and theNature Conservation Act 2014.

Kangaroo culling on Red Hill, 2022
The first kangaroo cull on Red Hill was undertaken in 2022.  The Nature Reserve was closed to the public between 6pm and 7am, on every week Sunday to Thursday, between 23 May and 1 August 2022. The following information was provided:

ACT Parks and Conservation Service are undertaking a conservation cull of eastern Grey Kangaroos from Monday the 23 May.

The parks and reserves within our city and on the urban fringe contain some of the largest remnants of critically endangered grasslands and grassy woodlands in Australia. These are home to many threatened species, including the Grassland Earless Dragon and Striped Legless Lizard. Strong action is needed to conserve and protect these species and their habitat.

The human impacts on the natural ecological balance of the region, and a reduction of natural predators such as dingoes, has unfortunately meant that kangaroos are prone to becoming overpopulated in our urban environment and overgrazing the abovementioned habitats. If kangaroo populations are not managed within these urban reserves, overgrazing reduces the health of these grassy habitats, impacting endangered species and ecosystems as well as the habitat required to support sustainable kangaroo populations.

As such, the ACT Government has been undertaking kangaroo management for over a decade with the goal of improving the resilience of our grassy landscapes to the unpredictable Australian climate. The primary purpose of the kangaroo management program is to reduce total grazing pressure on critically endangered grasslands and grassy woodlands, not to eradicate kangaroos.

Recent rains have continued to provide excellent growing conditions for ground layer vegetation and so kangaroo management is not required at a number of sites this year. Due to a reduced need for culling at several sites, this year’s program will expand management into Red Hill Nature Reserve for the first time. Kangaroos management will continue at Mt Ainslie and Mount Majura nature reserves,  Mulligans Flat Woodland sanctuary,  Goorooyarroo Nature Reserve and Jerrabomberra West Kangaroo Management Unit.

To facilitate the safe delivery of the conservation cull 9 of the 37 reserves in Canberra Nature Park will be closed in the evenings from 6pm to 7am from Sunday to Thursday but will remain open during the day and from Friday morning to Sunday afternoon.

For more information about kangaroo management in the ACT go to https://www.environment.act.gov.au/parks-conservation/plants-and-animals/urban-wildlife/kangaroos

These links (photographs and movie) show the photo monitoring work of Waltraud Pix, Dean Graetz and the Friends of Mt Majura (FOMM), with an ACT Environment Grant. The movie is long but thorough and overall very convincing about the effect of kangaroos V rabbits on herbage mass. The photos indicate a previously under-estimated level of biodiversity threat to plants from kangaroo grazing. A somewhat disturbing impact we are not addressing in the steep or more wooded areas.

In 2010 a small number of kangaroos were fitted with tracking collars which enabled their daily and long term movements to be recorded. The tracking records of two kangaroos – Rufus and Ruby, show their limited feeding range over a long period (click images below to enlarge). 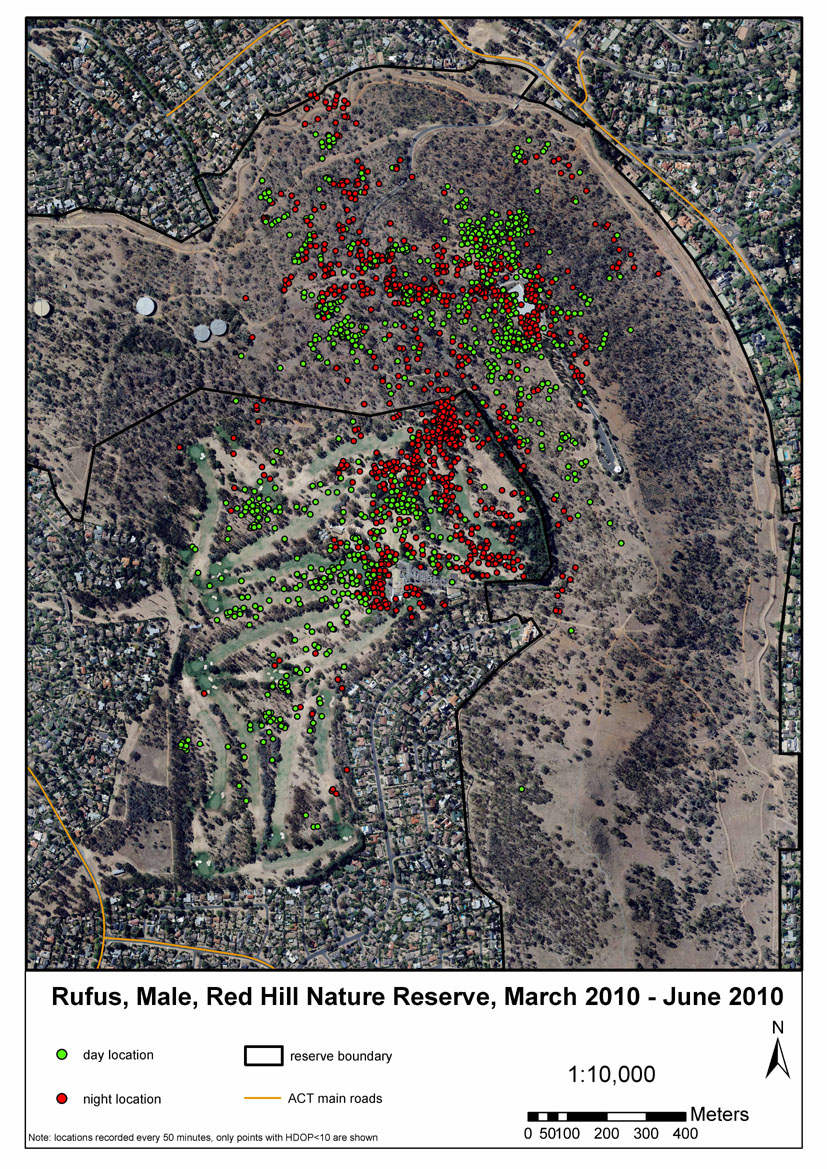 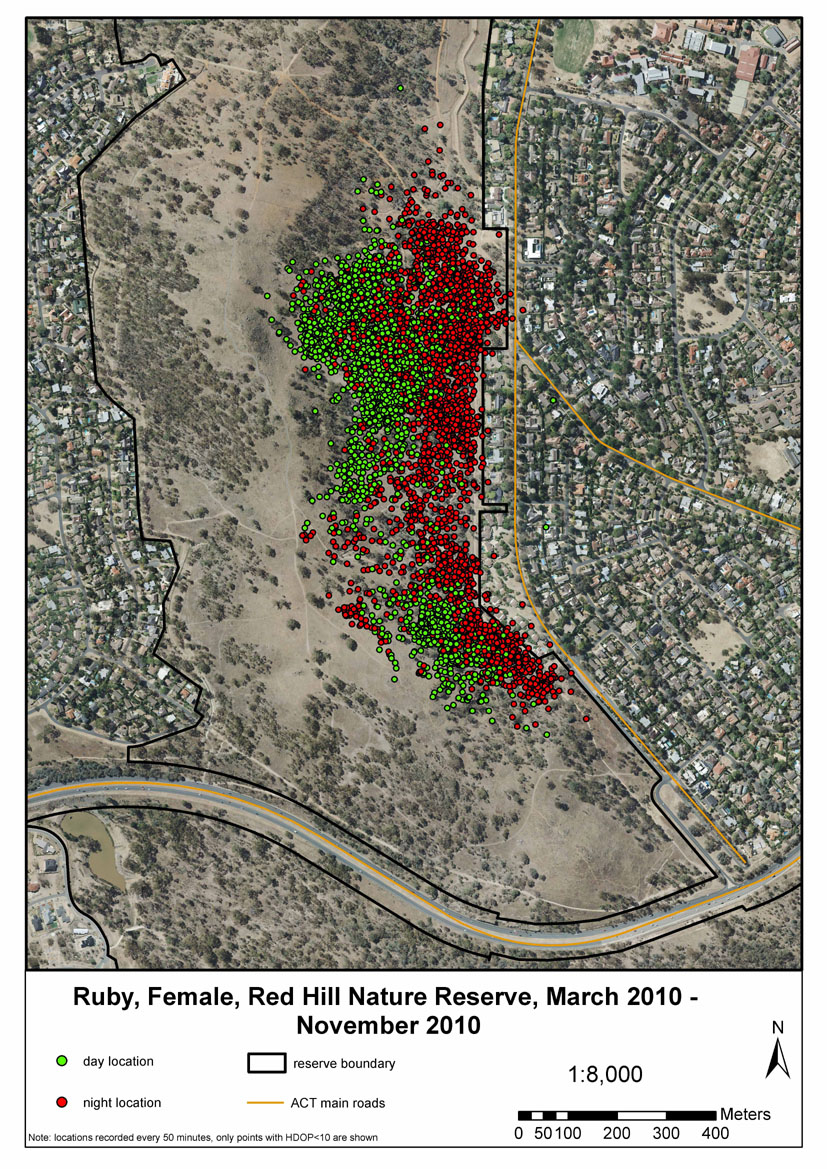