News about our Little eagles 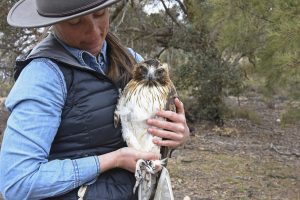 Little Eagle about to be released after being banded Stuart Rae

The Red Hill Regenerators applied successfully to the ACT Government on 12 April 2019, for a grant of $30,000 to assist in a study entitled ‘The ecology and movement of ACT’s adult female Little Eagles“

Since receiving the grant, work has progressed on fitting GPS trackers to Little Eagles and following their progress. As at November 2019, interim results from the annual survey of Little Eagles breeding in the ACT in 2019 show that there is a minimum of nine pairs holding territories in the Canberra region, and at least seven laid eggs. One chick has already fledged, while other chicks are about four weeks old. Twelve birds have been fitted with gps-tracking devices to date, including three adult females and one male this year. More will be fitted after the chicks fledge. This is giving data on the local foraging range of the birds during the breeding season and has shown that the birds can move as far as the coasts of South Australia and the Gulf of Carpentaria. Such invaluable information could not have been gained without the use of this modern technique.