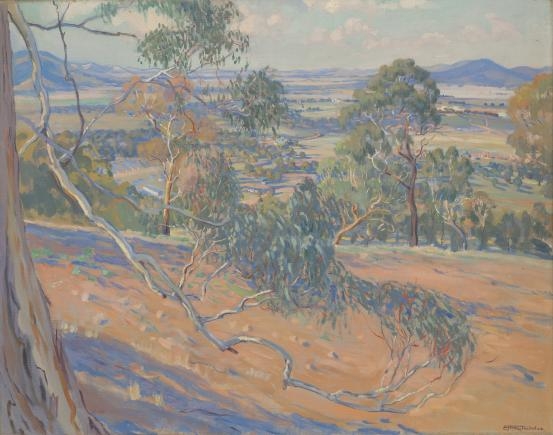 A selection from Moments from Red Hill called the Red Hill Moments Album can be found on Youtube at https://www.youtube.com/watch?v=iSIckZ4rL1M  It is comprised of five poems Red Hill Grounding, Ownership, Within the Flock, Stone Knife on Red Hill and The Return by Paul Williamson along with associated nature notes by Michael Mulvaney. The readings are accompanied by pictures (mostly by Red Hill Regenerators) of the flora, fauna and scenery of Red Hill, an indigenous stone tool and efforts of Red Hill Regenerators, as well as an ink drawing by Michael Bedingfield. The Album aims to give an overall sense of Red Hill and its natural beauty and value.

Here are some more poems by Paul Williamson about different aspects of Red Hill. If you have any poems about Red Hill that you would like published here, just contact us here.

I travelled far to see those clear skies

above the looming pines that try to claim it;

to hear the silence and sense

what it holds; to find fresh nature

and make friends that last.

In the city the heavens are crowded

by thrusting angles; streets are filled

by noise and need; the smooth voices

as they reign in turn.

On this hill the eucalypts blanket

the living space where kangaroos

birds and insects cycle from birth

to birth again, and I hear once more

silence and wild calls on the breeze.

The thin track makes a maze
loosely walled with tea tree and sheoak
that grow undisciplined
inside the framework of gums.
Late-autumn wind bites
as I pick my way quietly.
There is a sharp note from a thicket.
Then like an unseen wave breaking down the hill
calls erupt from the mixed flock.
A Yellow Tailed Thornbill flashes past.
Blue Wrens bob and hop in a scattered troupe.
Speckled Warblers peck in leaf litter.
Shy Spotted Pardalotes briefly visit
while the brown-winged Shrike Thrush stands sentry
on a thick angled branch above.
Nearby a Scarlet Robin watches
me the lumbering mammal in their midst.

In the back door Eucalypt forest
the hillside nurtures pinto and dappled trunks
like creatures that stand on hind legs
as if in suspended animation
to build an arched church to nature.

Seeming symbol of a green alernative
waiting to cherish
the rabble of rosellas
shy padolotes, warblers, frogmouths
a blend of grey kangaroos

it welcomes, calms and patiently reminds
of the forest’s life and dignity
under the threat of human nature.

Decades back on a family trip
we saw eagles strung dead
wing tip to wing tip on miles of barbed fences.
Sheep grazed the dry grass behind.
Deaths for crimes against rural livelihood
were later eclipsed by DDT.

For years a reclusive pair of survivors
has worked the roads from Mugga Ridge to the south.
Each year they send their young to fly
until this season with good rains for growth and
food for extra chicks
returns wedge-taileds to Red Hill.

The noise is curious
I am drawn to look
to ghost through the garden
edged with cold and dew
in early morning night
with no moon
or electric light
with no clouds or factory haze.

Constellations are bright
across the acrylic sky.
Above the horizon a red star
hovers like a sentry
while night shines half-day from starlight.

I have seen this sky before
above a country river.

Paul Williamson
http://www.paulwilliamson.net
(This was published in 2011 in Magic Cat Press (UK)

The walker from the opposite way
nods a nervous greeting in dim light
resolutely pounds the track
in crisp, wind-blown cold.

Endorphins fire trees into focus;
sunset turns orange and black
like a tropical fish
to colour the undersides of dark clouds

while the brain urges dusty feet
on a quest
to hold muscle.

There is movement all the time on the hill.
In daylight hours, wrens flit
galahs search the hollows, kangaroos
spirit between tea tree and eucalypts.

Father carries his child on his shoulder today.
Mother follows with a spare warm jumper.
A cyclist strains along the rough track
speaks, head-turned in passing.

Now on the hard ground of the ancient
mound, I find the forgotten stone knife
left on the earth-given kitchen bench
when the tribe moved onward.

After the trees were felled for sheep

another one white, another pink.

most of the trial plantings

so he brought back native eucalypts.

But a stand of coastal bottlebrush

mauled into metamorphics and rose volcanics

survived below the eastern brow of Red Hill

a scouting height under Ngunnawal skies;

living through long months without a drink

to be burned a dozen times.

A hundred years later I wander the slope

below the restaurant at the top of the Hill.

an eastern grey kangaroo looks bemused I am off track;

Down the slope are sheoak, tall and crowded;

above them the band of bottlebrush flourishes 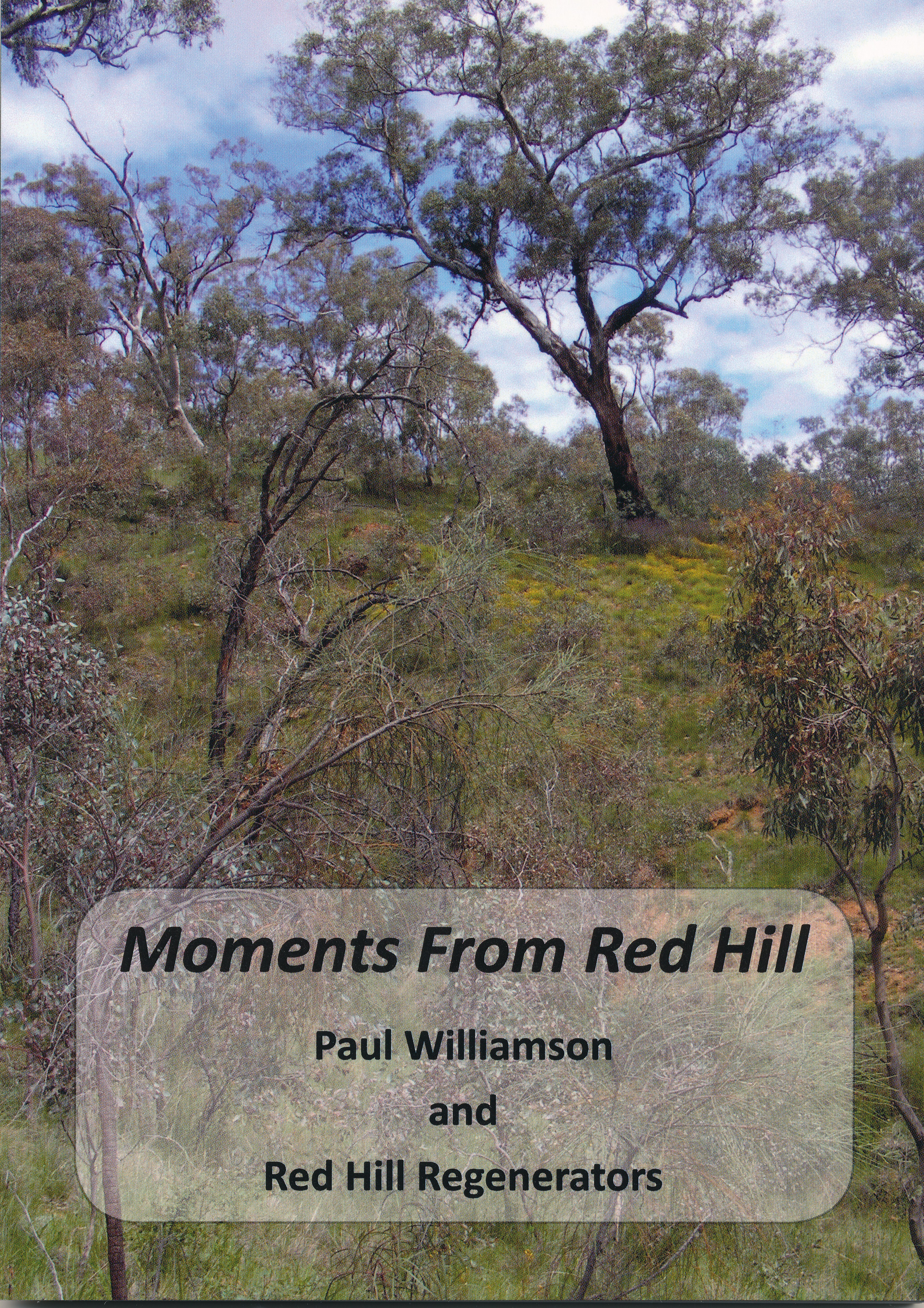 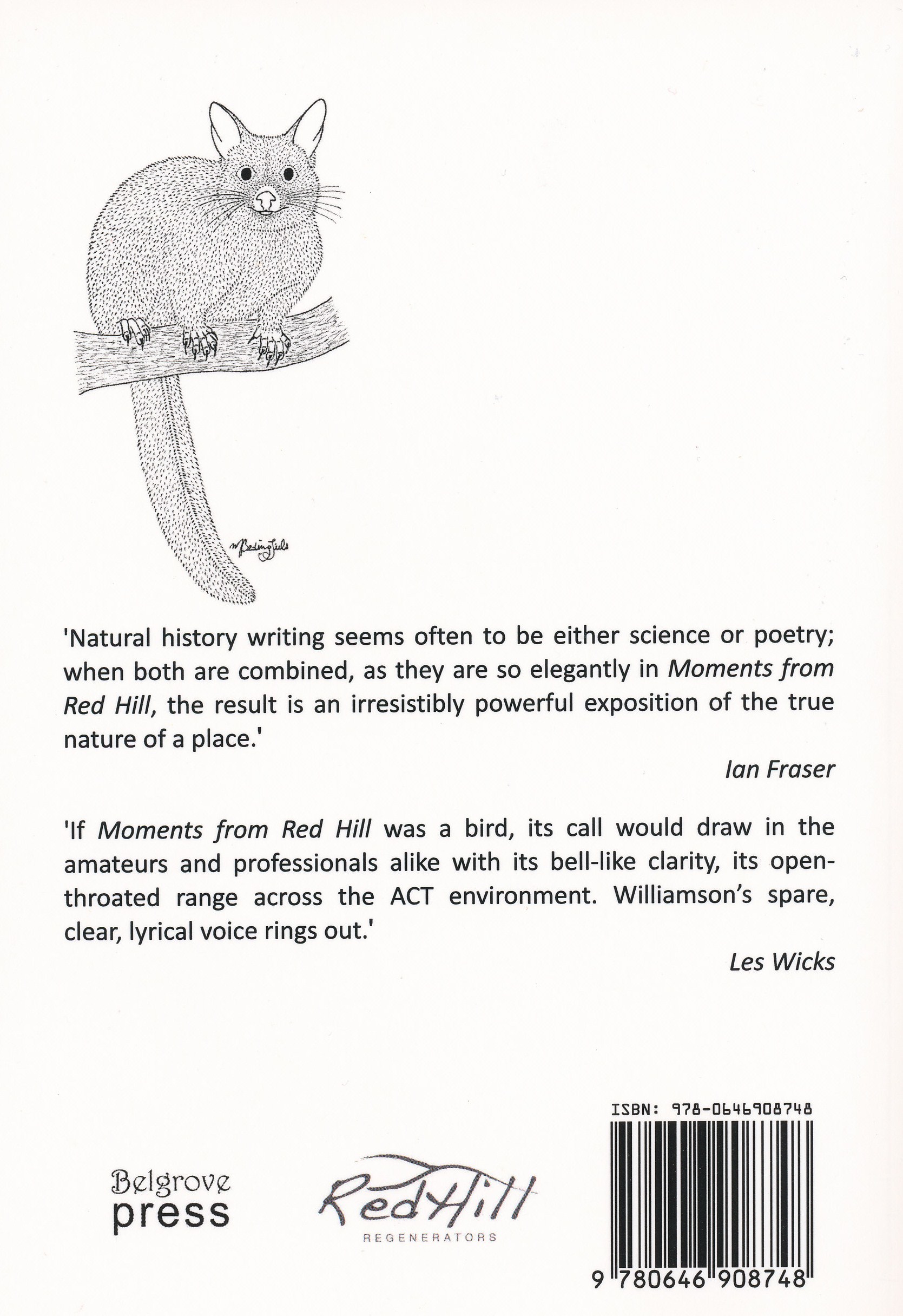 “Moments from Red Hill” – back cover

Moments from Red Hill is a celebration of the wild native flora and fauna living on the Red Hill Reserve, through poetry, line drawings, colour photographs, stories and nature notes.

This 88 page book includes 48 poems and 32 tanka poems about Red Hill, its animals and plants, history and seasons. The poems are accompanied by 22 nature notes providing quirky facts and stories about Red Hill’s wildlife, 13 exquisite line drawings of some of the plants and animals found on Red Hill, and 16 colour plates containing over 50 photos of Red Hill’s birds, butterflies, spiders, grasshoppers lizards, plants, trees, landscapes and rocks.

The book was launched to a full house at the Red Hill Lookout Restaurant on 12 December 2013. Photos

Moments from Red Hill is published locally by Belgrove Press and can be purchased for $15, or four for $50. 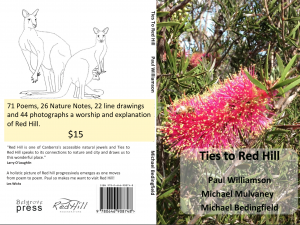