The red soil of Red Hill is caused by weathering of rocks called hornfels. Hornfels are created when sedimentary rock is metamorphosed, without melting, by contact with very hot, molten rock. Red Hill contains some of the best exposures of hornfels in the region and is an important geological education site. The best examples of hornfels on Red Hill are the hard rock outcrops between the summit restaurant and the golf course access road, in the old quarry 50m south-west of the restaurant and rock outcrops above Strickland Street, Deakin. A boulder of Tonalite, volcanic rock (pluton) formed deep under the ground, is exposed above the Golf Club Road and is a regionally important example of its type.

The tonalite pluton is considered to be the heat source fro the development of hornfels exposed on the summit ridge of Red Hill from Yarralumla Formation siltstones and sandstones seen in outcrop e.g. Deakin Anticline and Yarralumla Brickworks.

The rocks which make up Red Hill generally to the northwest of the summit restaurant are Yarralumla Formation (composed of shale, limestone, volcaniclastic sediments and calcareous hornblende) aged around 420 million years old. South east of the summit restaurant there is a major unconformity with older Dactitic Ignimbrite (430 ma) found in the south eastern part of Red Hill towards Hindmarsh Drive. The Dactite can be clearly seen at Davidson’s trig. 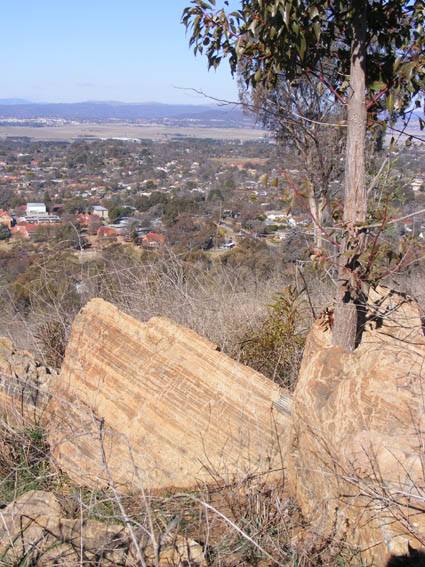 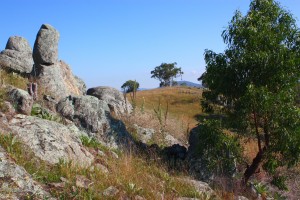