Safron thistles before and after.  After a wet year in 2019, many thistles grew from the extensive historic seed bank, once more covering the hillside. 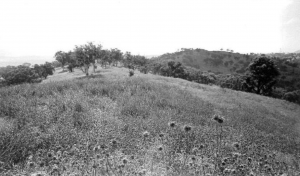 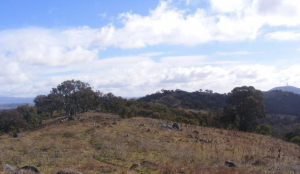 The majority of weed removal on Red Hill is undertaken by either backpack/hand spray or by ‘cut and dab’. The most common herbicide used is Glyphosate (Roundup), which is diluted and a red vegetable dye is added.  Recently, the hazards associated with Glyphosate use have been highlighted globally, with a range of actions being reported in ‘Weeds News, including:

A report (Crit Rev Toxicol. 2016 Sep: 46 (sup 1):3-20) published in September 2016 titled “A review of the carcinogenic potential of glyphosate by four independent expert panels and comparison to the IARC assessment” concluded  that glyphosate is ‘unlikely to pose a carcinogenic risk to humans’. More…

The main tasks which occupy the Red Hill Regenerators is removal of weeds from the critically endangered Yellow Box – Red Gum Grassy Woodland of the Red Hill Reserve. 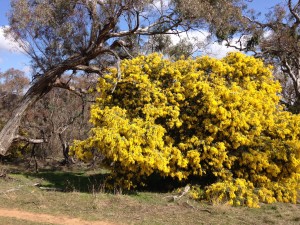 The annual debate over the practice of removing Cootamundra Wattles from Canberra Nature Reserves (including the Red Hill Reserve) has been ignited by a letter to the Canberra Times of 13 August 2015. More…

A response was published in the Canberra Times on 20 August 2015. More…

Cootamundra Wattle (Acacia baileyana) is a Class 4 Pest Plant in the ACT and is important to control due to its invasive nature.  It can be found on Red Hill in dense stands where it crowds out other local plants. The presence of Cootamundra Wattle in Yellow Box-Red Gum Grassy Woodland on Red Hill has been shown to promote a higher fire hazard in invaded sites compared with natural uninvited sites. More…

The Red Hill Regenerators remove dense stands of these plants by ‘cut and daub’ methods.  Where older plants are found we try to use the ‘frilling’ method which helps to retain bird nesting habitat.

More information can be obtained from the Molonglo Catchment Group.

Some of the more common weeds found on Red Hill are pictured below:

Here is a picture of Chilean Needle Grass (a weed of national significance), which can be sprayed in winter when it can be more easily seen. 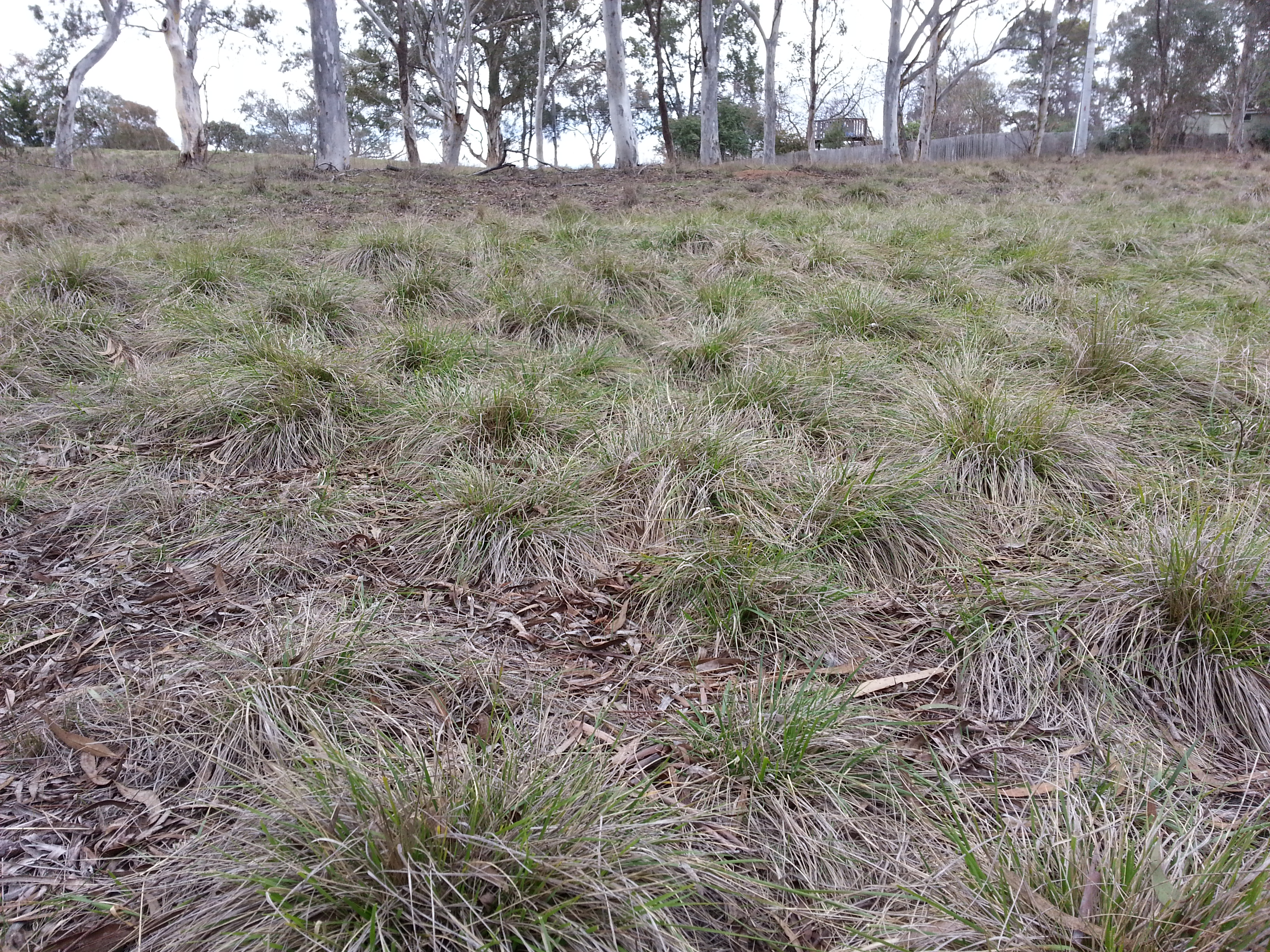 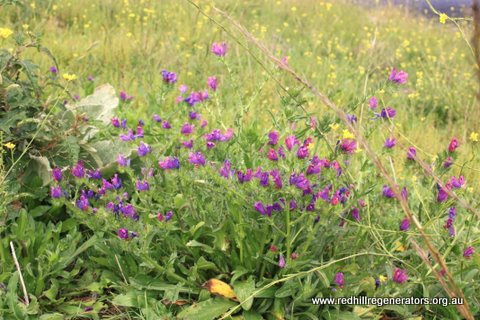 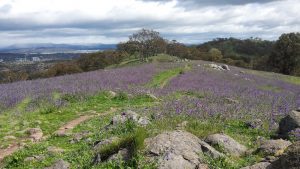 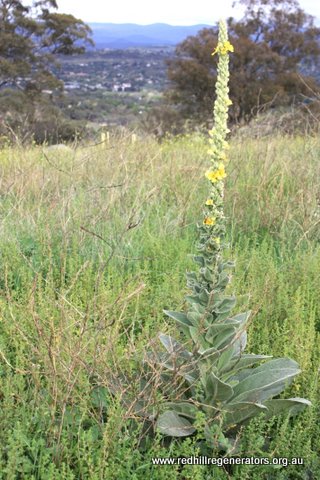 Verbascum with flower spike containing about 100,000 seeds, which can survive for decades 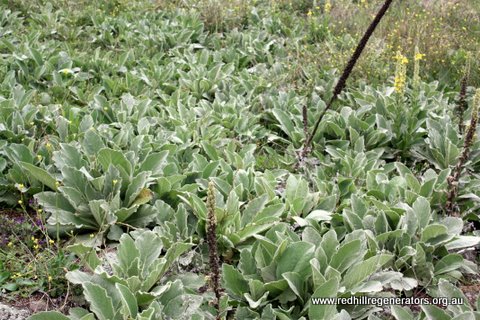 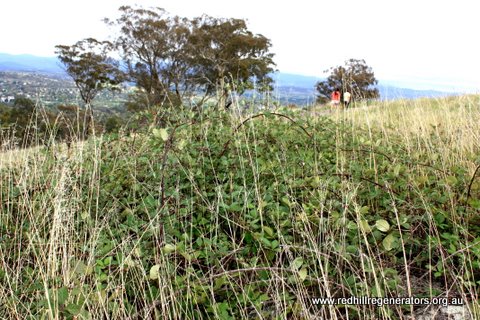 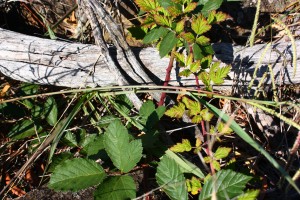 and the native small-leaved bramble, which provides valuable nesting habitat 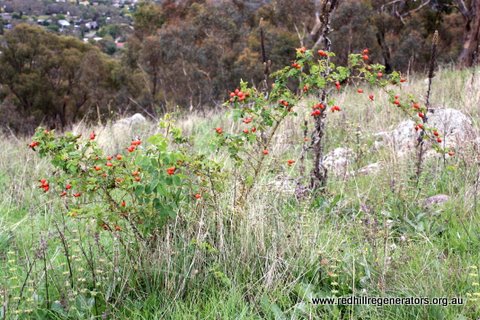 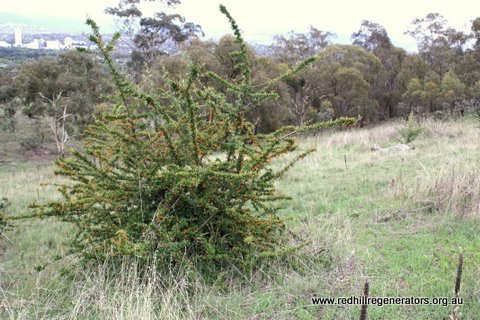 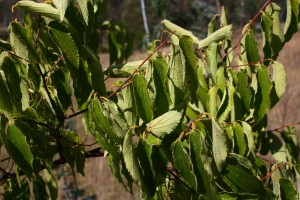 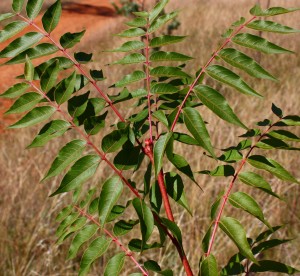 More about Tree of Heaven 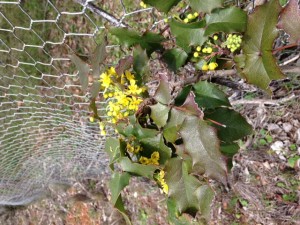 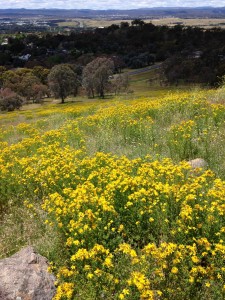 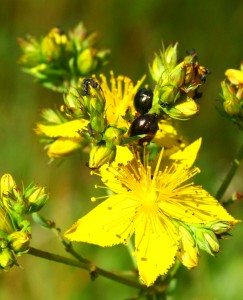 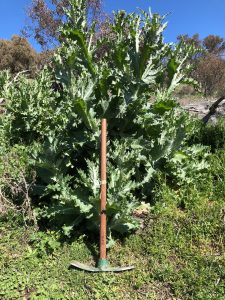 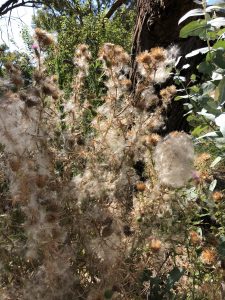 Scotch thistles are usually found under old eucalyptus trees where cattle have historically sheltered. The simplest treatment is to chip them out before they get as large as this one, or spray at rosette stage. Once they are in flower they will set seed (see above) even if chipped.