Red Hill is an area of Yellow Box/Red Gum Grassy Woodland. Today only scattered areas of this type of woodland exist in the ACT and it has been declared a critically endangered ecological community under the Environment Protection and Biodiversity Conservation Act 1999 (EPBC Act). .

Yellow Box/Red Gum Grassy Woodland is an open woodland in which Yellow Box (Eucalyptus melliodora) and Blakely’s Red Gum (Eucalyptus blakelyi) are the dominant trees. The trees form an open canopy above a species-rich understorey of native tussock grasses, herbs and scattered shrubs.

A number of plant, bird and insect species associated with Yellow Box/Red Gum Grassy Woodland have also been declared as vulnerable to extinction or endangered in the ACT. They are:

Woodland is characterised by a discontinuous layer of tree canopies 10 – 30 metres in height having a foliage cover of 10% – 30%.  In Grassy Woodland, the next tallest vegetation layer with a cover of more than 10% is dominated by grasses.

In Yellow Box/Red Gum Grassy Woodland, the understorey is usually dominated by a more or less continuous layer in which mid-height tussock grasses are prominent. Structurally and floristically, this stratum closely resembles Natural Temperate Grassland.

Shrubs may also be present and may sometimes form a discontinuous middle layer. 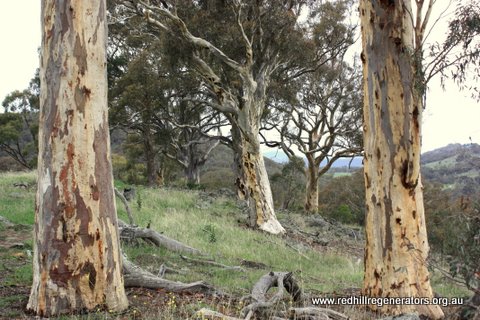 The smooth barked Red Gum (Eucalyptus blakleyi) and Yellow Box (Eucalyptus melliodora) which has bark most of the way up the trunk, are the commonest trees on Red Hill. The Red Gum and Yellow Box trees are well spaced to form an open canopy under which flourishes a diverse grassland containing many wildflowers. Elsewhere the Red Gum – Yellow Box grassy woodland has been extensively cleared and it is now an endangered community in the ACT.

Did you know? The name Yellow Box may have been named because it has flouro yellow roots. 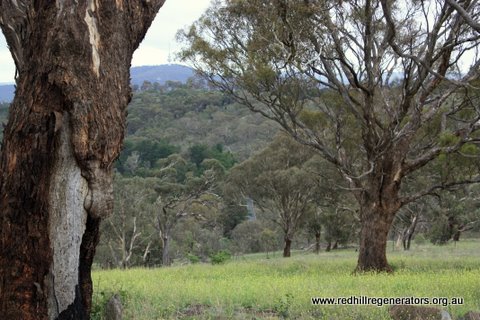 The Apple Box (Eucalyptus bridgesiana) occurs on the lower ridges and rocky slopes. It can be readily identified by its persistent greyish, fibrous bark and very long leaves which taper to a fine point.

Did you know? The Apple Box may have been named because of the apple like growths that form on their leaves by wasps that inject egg larvae into the young leaf that then grows to form a soft apple like growth or gall, until the wasp emerges.

Many of the older Eucalypts have hollows where they have dropped branches. These are an important habitat for birds and possums. If you keep your eyes open you are likely to see a parrot peeking out of one of these hollows.

The Drooping Sheoak (Allocasuarina verticillata) is a small tree with drooping greyish-green stems. Its leaves are barely visible to the eye. It grows amongst eucalypts in grassy woodlands but forms pure stands on rocky outcrops.

Wild cherry or Cherry Ballart (Exocarpus cupressiformis) Scattered around Red Hill are specimens of this small cypress-like tree which bears orange-red fleshy fruit stalks in winter. Its distinctive fine, drooping, rusty-olive-green foliage provides an interesting contrast to the other colours and shapes of the woodland. What makes this plant so interesting is its semi-parasitic nature – it usually needs the roots of other plants to attach its own roots to before it will grow.

Other tree species may be associated with Eucalyptus melliodoraand Eucalyptus blakelyi in the Yellow Box/Red Gum Grassy Woodland community. These include: 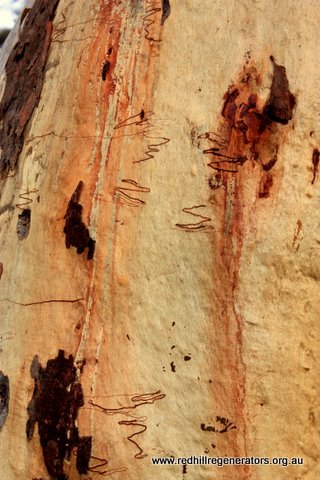 A number of daisy species occur on Red Hill. One of these, Rutidosis Leptorrhynchoides (Button Wrinklewort), is an endangered species, and at more than 5,000 plants, Red Hill has one of the largest remaining populations. Features which distinguish it from other daisies are small button flowers, a long, slender stem and narrow, needle-like leaves. Rutidosis is now bred for commercial sale at Yarralumla Nursery.

It may also include a rich flora of forbs (herbs). These include:

A shrub layer, when present, may contain some of the following:

The hollows in older tree trunks and branches, together with fallen wood, are vital habitat for many of these species. Trees do not develop hollows until they are at least seventy years old and some standing trees are now about 300 years old. Termites, fire and wood rotting fungi promote hollow formation but the hollows may carry fire up into trees and eventually destroy them.

Loose bark provides shelter for some of the invertebrates which in turn provide food for birds. The shrub and grassy understorey also provides nesting sites, shelter and food resources for fauna.

In the ACT, about fifty bird species occur as residents or summer migrants in grassy woodland which is an important breeding habitat for many species including:

The Canberra Orithologists Group (COG) has information about woodland birds of concern, which can be found on Red Hill. 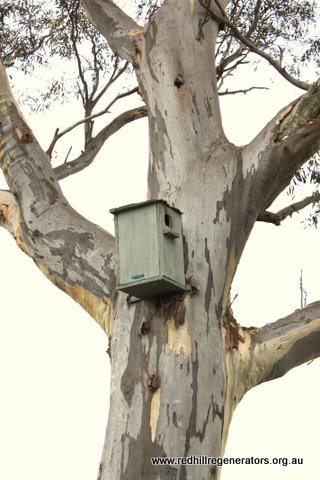 Species which have declined in numbers, in addition to the vulnerable and endangered species mentioned above, are:

Among the birds of prey are:

The Eastern Grey Kangaroo (Macropus giganteus) is abundant in the ACT and occurs in all types of grassy woodland on both rural and reserve lands. In the marginal dry hill country of the lower Naas and Gudgenby catchments, the Wallaroo (Macropus robustus) is present in small numbers. Other mammals found in grassy woodland include: 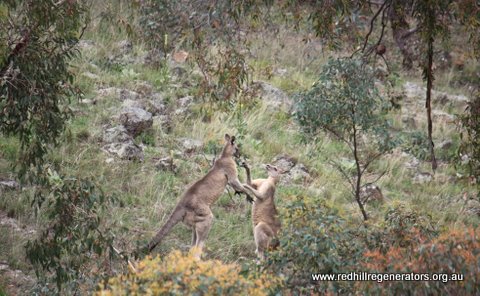 Red Hill supports about eighty Eastern Grey Kangaroos (Macropus giganteus). During the day groups rest in the shade or shelter of trees and shrubs and move out to graze on the cleared grasslands from late afternoon to early morning.

The Echidna (Tachyglossus aculeata) is a terrestrial inhabitant of woodland, and shelters in the soil and feeds on ants and termites.

Many species of reptiles have been recorded in woodland areas including:

Frogs occur in wetter areas within woodland and may use logs, rocks and thick grass for shelter. Species recorded in ACT woodland include:

Some information in this page is taken from the Woodlands for Wildlife: ACT Lowland Woodland Conservation Strategy (Action Plan No. 27)