Until recently the only attention that we have been able to direct towards better understanding and managing grazing impacts of kangaroos and rabbits on Red Hill was as an indirect consequence of the impact our blackberry control efforts have on rabbit numbers by reducing their refuges.

An invitation from Canberra Parks & Conservation Service in 2010 to survey and map rabbit warrens in the Reserve provided a welcomed opportunity to for our Group to get more actively involved in rabbit management. Our survey, undertaken in April 2010 covered the southern sector of the Red Hill Reserve as a precursor to planned rabbit warren management and ripping activity by private contractors. It involved two separate working bees and a total of 45 hours of work by 8 volunteers. Through this process we identified a total of 54 rabbit warrens, several of which were quite large and complex. Each of these sites were expeditiously dealt with by the contractors.

Unfortunately there is considerable evidence that rabbits will re-establish themselves in the area treated and it seems that ongoing and sustained efforts will be required to permanently address the rabbit infestations on Red Hill.

Fortunately, since the 2010 warren survey, there has been considerable followup in later years by the Parks & Conservation Service. In addition, requests have been made to the adjacent Federal Golf Club to remove large patches of blackberries which harbour rabbit warrens. Work was undertaken in 2013 which resulted in a number of rabbits establishing themselves in the adjacent house gardens, making their removal very difficult.  In 2014, baits laced with Pindone were introduced adjacent to the Hughes and Garren urban interface.  This has had some impact on rabbit populations in this area, but more detailed work with householders is required to ensure that the residual rabbit populations being harboured in house gadens does not result in a repopulation of the reserve.

The Regenerators acquired a GPS in 2014 on loan from the P&CS which is used to record the locations of warrens. This information is passed on the P&CS on a regular basis.

Rabbit warren fumigation on Red Hill was undertaken in April and May 2015 by P&CS contractors. More…

In 2016 P&CS introduced a phone App (Collector), which enables any person with password access to the App to identify and map/locate rabbit warrens, thereby creating a permanent record of warrens, which will simplify followup activities. After the Regenerators had mapped almost 70 warrens, P&CS arranged for contractors in June 2016 to fumigate the warrens. 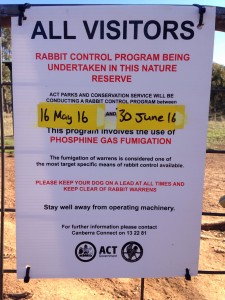